Jeffrey Davis Takes two steps forward and one back

When I was eight, my parents divorced. During the summers, I visited my father in Los Angeles. My dad was writing with Danny Simon (older brother of Neil Simon) freelancing shows like Bachelor Father, McHale’s Navy and The Donna Reed Show. When my father was out, I would sit down at his lime green Royal portable typewriter and pull out a few pages of a half-written episode and study the pages carefully. Next, I’d roll a clean sheet of canary yellow paper into the machine and copy what my father and Danny had written. One afternoon as I was hunting and pecking, my father came in from a meeting. He saw what I was doing; “Looks like your writing career is on its way. You’re already stealing from other writers.”

By the time I finished college I decided I was going to write the great American novel. As a logical next step I got my M.F.A. at the Iowa writers’ workshop.

I left Iowa with a dozen short stories and more importantly, a bildungsroman. Just for the few out there who don’t know what that is; it’s a thinly disguised autobiographical novel. Then I thought about how many people would be interested in my life, thinly disguised or not and seemed to have misplaced my novel. I sold some of the stories to Ploughshares and other magazines. But I can’t seem to find that misplaced novel. But if I could find it, I’d burn it.

A few years out of graduate school, I reluctantly found myself following my father into the entertainment business. A producer optioned two books and hired me as an assistant. He made a deal with a studio to develop them. The studio was Paramount and every day we crossed the street to Lucy El Adobe for lunch. One afternoon, three months in, we came back to the office to find pictures and photographs off the walls, office supplies, books and scripts in boxes. It turned out the producer had never actually optioned the books. Paramount booted him out and as his assistant, me along with him.

Something good came out of my time at Paramount. I met my long time writing partner. We both came from show business families. Her grandfather and uncles were the Fleischer brothers who created Popeye and Betty Boop. We began our collaboration writing jokes and sketches on Thicke of the Night, with Alan Thicke. We moved to situation comedy on House Calls with Lynn Redgrave and Aaron Spelling’s Love Boat, followed by a dozen other shows, including Night Court, as well as pilots for NBC and Metromedia. After fourteen years, my partner wisely decided to move into production. We ended on a high note writing for America’s Funniest People and Bugs Bunny’s 50th Birthday. So I went solo for a few years with film projects in development at Bette Midler’s All Girl Productions, Paramount and Arnold Kopelson.

I realized that writing is never more fun than when you are collaborating, so I asked show business for an amicable divorce. Since I was still a writer, I went into advertising and public relations. I worked for Microsoft, Toyota, and Apple and also wrote comedy radio spots for Mont Blanc, Jordache Jeans and Payless. You know, writing is writing. It’s all about telling a compelling story.”

To satisfy my writing urges, I turned to playwriting and someone somewhere along the line saw one of the plays I produced or read one of the books and asked me to consult and produce two short films that were finalists at the Tribeca and Seattle film festivals. This has been followed by work for A&E, Discovery, the Time Life channel and the short-lived Fox Reality Channel, among others.

In 2002 I was hired to teach writing at Loyola Marymount University’s School of Film and TV. Through the accident of my son’s playdate running overtime, I met Peter Desberg, a professor at California State University, Dominguez Hills. As we chatted, I told him I was a writer and professor, but I was now expected to produce academic work. This prompted a story of a project he had started years before interviewing Hollywood comedy writers. I asked Professor Desberg to tell me the names of the writers they’d interviewed. As he reeled off each name I became more excited. “All those guys were around my crib playing poker with my dad.” When he saw my excitement, he suggested we revive the project. The result is two books on the art and craft of comedy and a third on using the Hollywood pitch in business. After sixteen years, I’m finally permitted to call Professor Desberg…Peter.

Coming full circle, I know that my father’s lime green typewriter, given to me by my last stepmother, is around my house somewhere if I could only find it. But even without it, I’ve gotten to hear phrases like, “It’s just not right for us,” “It sings but it doesn’t soar” and “We’re developing six projects just like it” in many dialects. What’s kept me going is that I’ve also gotten to hear that elusive one syllable word, “Yes.” 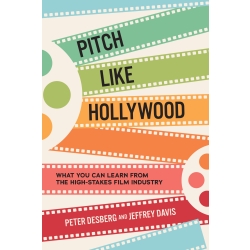 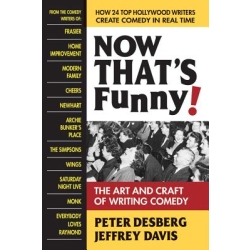 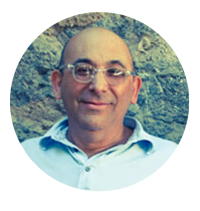